A real-world analysis of 9.2 million patients included in a German insurance database showed no evidence for increased mortality associated with paclitaxel-based drug-eluting devices (DEDs) during 11 years of use in endovascular revascularization (EVR) of peripheral vessels. The findings from the analysis were published by Eva Freisinger, MD, et al in European Heart Journal.

According to the investigators, the study sought to address the safety concerns raised by recently published data that indicated a two-fold increase in long-term mortality in patients treated with these devices. The concerns caused international regulatory authorities to issue several alerts for further application of paclitaxel-based DEDs.

As summarized in European Heart Journal, insurants of Barmer Health Insurance were included in the data on the application of paclitaxel-based drug-eluting stents (DESs) and drug-coated balloons (DCBs) and were retrieved from their introduction on the market in 2007 until present.

All patients who underwent their first EVR between 2007 and 2015 were indexed and followed until December 31, 2017. Each subsequently applied DES, DCB, bare-metal stent, and uncoated balloon was included in further analyses. Multivariable Cox regression analysis considered potential nonlinear time-dependent hazard ratios (HR) of DES and DCB use over 11 years.

The investigators identified 64,771 patients who underwent 107,112 EVR procedures using 23,137 DEDs. Multivariable Cox regression analysis showed that paclitaxel-based DESs were not associated with increased long-term mortality for over 11 years after application (all P > .057). DCB use was associated with decreased long-term mortality for the first year after application (HR, 0.92; P < .001) and indifferent correlation in the years thereafter (all P > .202), reported the investigators in European Heart Journal. 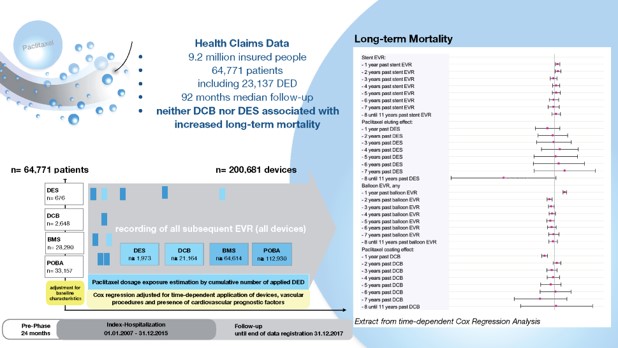